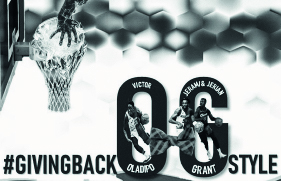 Despite the Corona Virus and gloomy weather, the Hour Generation Foundation (HGF) led by Jerami Grant was able to give back to the Prince George’s County community as a part of a successful ‘Food for Thought Grocery Pop-Up’. The event was hosted by DeMatha Catholic High School and led by the Gamma Pi Chapter of the Omega Psi Phi Fraternity who also runs Food for Thought – an organization that focuses on giving back to their community through various food drives organized by Donovan Bonten. Hour Generation was able to also partner with fellow DeMatha Alumni Jerian Grant – guard for the Washington D.C. Wizards and Victor Oladipo – guard for the Indiana Pacers and CEO of Limitless.  This collaboration was brought together by Joel Banks who is a DeMatha parent alumnus and a member of both the Omega Psi Phi Fraternity and Food for Thought.

Food for Thought has hosted many events in the past, including computer and food drives for various schools, but this is by far the largest contribution to date. Helping many high schools during this pandemic, they felt the need to also help families in the Hyattsville community. Both DeMatha High School and Riverdale Elementary School partnered for the event. DeMatha’s head coach Mike Jones helped host the event as well as pulling together a host of volunteers who included past and current members of the basketball team and DeMatha Parents. Together with, Hour Generation Foundation, Limitless and Omega Psi Phi, Food for Thought and a host of others there were over 150 volunteers.

As local recipients drove through DeMatha’s entrance they were welcomed with music playing and an array of colors, from the Hour Generation black t-shirts, the royal blue that is unique to DeMatha, and the historic purple and gold representing Omega Psi Phi all while everyone worked seamlessly to accomplish the task at hand. There was a lot of positive energy at the event as everyone was dancing and singing along to the music from the loudspeakers and truly enjoying the opportunity to give back. The rain did not stop anyone from coming, nor did it not stop the organizations from helping. As people pulled up, they were greeted by the leaders of the event with a warm smile. They allowed four cars to pull up to the carpool at a time, and the volunteers then put the meals in the car, then the cars would drive off. It was a socially distant successful system led by, Omega psi phi vocal leader- Tiresias McCall. The event was highly organized.

The event turned out to be a huge success giving away over $10,000 dollars’ worth of food to families in need with a record of 500 boxed meals (boxes included 20lbs of chicken and beyond meat products along with a cabbage, 2 onions, 2 peppers, 2 whole tomatoes, 2 cucumbers 2 white potatoes, 2 limes and 4 can goods).  All volunteers wore masks and gloves to ensure safety and cleanliness for everyone involved, and organizers ensured that every person stayed in their car and practiced social distancing. “The Corona Virus has impacted everyone’s lives in different ways, and to reach out to the community and help families has been extremely rewarding and was the goal during this pandemic to help lower income families in Prince Georges County.”- Says Beverly Grant, a HGF board member and Alumni DeMatha parent. This made the community feel that they are not alone, and we are all in this together.

The Hour Generation Foundation should be incredibly pleased to have been able to be a part of such a successful event that helped the community.

Food for Thought is hoping to make this food drive held at DeMatha a yearly event. Food for Thoughts next event will be July 18, 2020, alongside the Divine 9 for the next food drive. It will be held at The Athletic Republic, formally known as Run N Shoot.